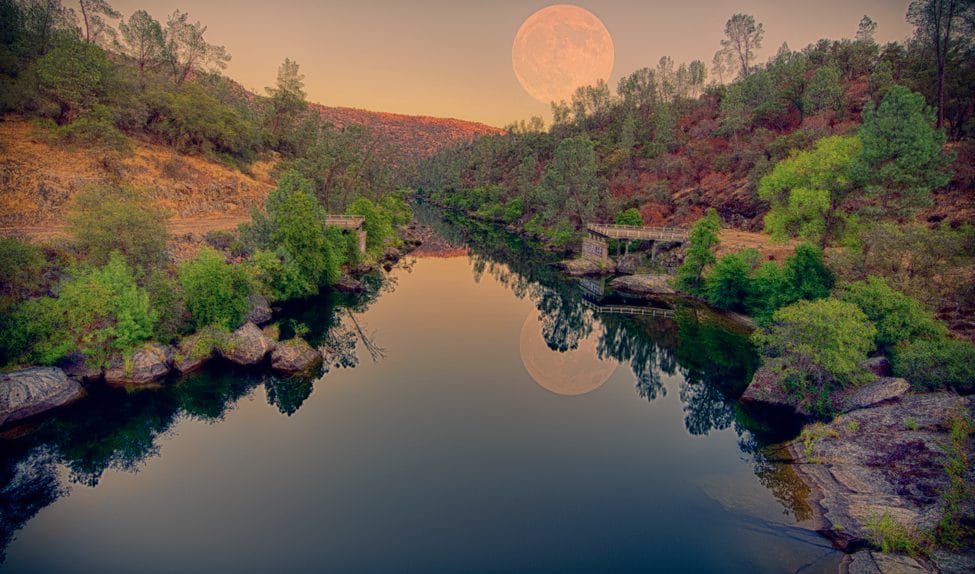 Perhaps it’s because I live in an area of the country that — “landscape-wise” — doesn’t tickle my sense of the artistic. Maybe it’s because I like tinkering. Or perhaps, I really wanted to be a painter, but realize I just don’t have the skills to make actual paintings from a blank canvas.

In any event, I’m never really all that happy with what I’m able to shoot in my own neck of the woods. I’ll often go out and drive for hours, only to return home without having taken one shot. I just didn’t see anything that made me want to stop my car, and get out the camera.

So it is that I tend to do what I can to “create” photos with the most interesting skies I can. I imagine what I want in my mind’s eye, and that’s what I “shoot,” even if it requires a little artistic creativity after the fact.

A perfect example is this post’s featured image.

To me, a perfectly clear sky is almost always a perfectly boring sky. It’s essentially a blankness in the canvas that just begs for my artistic side to fill it. They say Nature abhors a vacuum. I don’t know if that’s true, but I abhor a blank sky. I can’t think of any image I’ve ever seen with a blank sky that I liked.

“Moon River,” the featured image of this post, may not have been a mile wide. But as far as I was concerned, the expanse of sky in the original image was much more than that. A gaping pit of Nothingness. That might’ve satisfied Sartre, but it was too much for me.

For some reason, even though the original image doesn’t come close to providing a hint of this, my recollection of the scene was that it was very orange. The sun was setting. Indeed, I was unable to see it, as it was blocked by the hills behind me. I had stopped because I spotted a beautiful sunset glancing off a power plant behind me. (Perhaps that will show up in a future post.) But by the time I got my camera set up, the sun had dropped so low it was no longer hitting the power plant. I’d fired off a few shots anyway, and took the camera down to head to the car. When I turned around, I spotted the scene above. And, as I said, it appeared to me to be much more orange.

Later, when I looked at this in the computer — even after producing the high-dynamic range version of which the “original photo” above is just one frame — I saw barely a hint of that, in the hill farthest in the center background.

Playing off what I’d learned while creating “The Hills Are Alive,” I decided to change the scene both to fit my orange-colored memory, and to make the whole image visually more interesting.

I maintain a stock of shots I’ve done of things like clouds, stars, birds flying, the moon, and so on. Sometimes when I shoot them, I already have an idea how they might be worked into a photographic art piece; most of the time, I just shoot them knowing there’s a chance they will somehow, someday. I started playing around with some moon shots, and realized that the orange I felt predominated my memory would fit pretty well with a kind of “blood moon” image.

After that, it was a rather simple few steps to create masks to select out the sky-vs-treeline and river-vs-treeline-reflection using the blue channel. I dropped the moon into the image, re-sized it to approximate what I thought was a proper blood moon, which tends to appear larger (as an optical illusion) when it is closer to the horizon, and applied the appropriate mask. For the “reflection” of the moon, I simply flipped the original moon, and moved it lower the image. Each moon had it’s own mask; obviously, the tree lines were different. I unlinked the masks from the moons so that I could move the moons around independently of the masks — wherever they ended up, the trees would appear to be in front of them.

I fiddled with the opacity of “each” moon layer to find the right balance.

There are some hand “dodging and burning” steps I’m leaving out here. I did those with 50% gray layers set to Soft Light mode. (There are other approaches.)

Finally, I merged all layers (using Shift-Option-Command-E on my Mac, which maintains the lower layers inviolate), and applied some Nik filters. It was almost perfect. In the end, I felt the water was still a little too blue to “sell” this as a sunset-moon-rising shot, and I added another layer of orange over the water itself — the separate Color mode layer was then backed off a little, reducing the opacity until it looked right to my eye.

The “original” image was a series shot in HDR mode — my tripod held the camera about 11-plus feet off the ground! — all at f/13. Exposures started at 1/40th of a second, with fifteen images between that, and 15 seconds. ISO was 100. The camera was my Canon 5D Mark III with an EF14mm f/2.8L II USM lens — which reminds me, I altered the image before starting any of the work above, other than Photomatix HDR work, to straighten out perspective, and also to remove ledge you can see in the original (lower left corner of the image).

“Moon River.” It may not have been wider than a mile, but my imagination was.